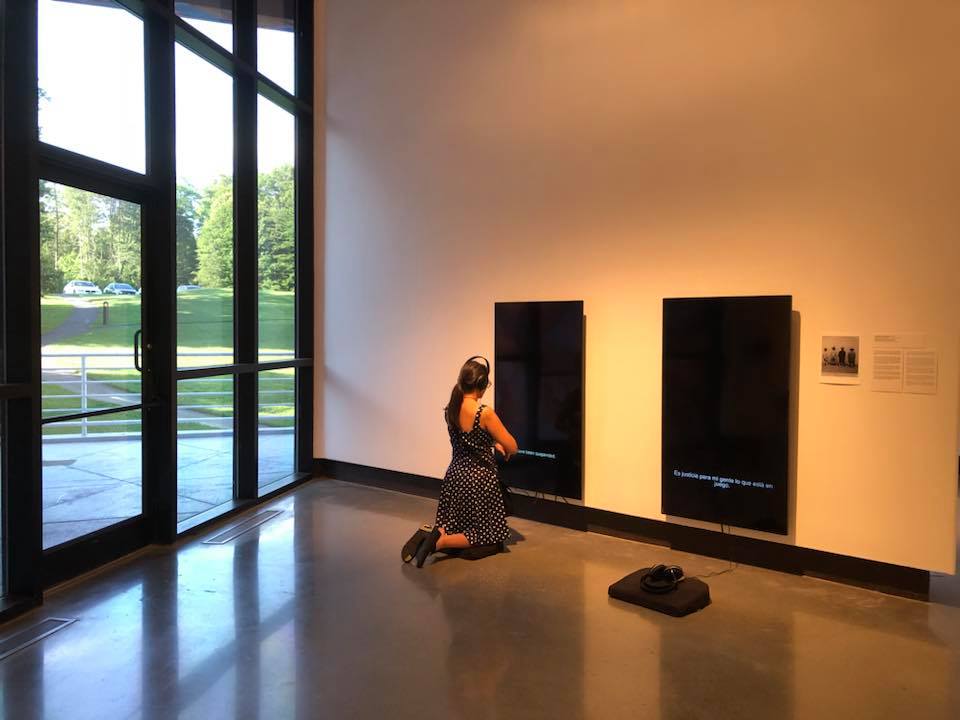 Alejandro Figueredo (b. 1991).  Lives and Works in Los Angeles

In this two-channel
video and audio work, the voices of Assata Shakur and Tania Bruguera reveal how
activists are implicated in the complexity of Cuba’s new situation after the
announcement on December, 2014 of the normalization of relations with the USA.

Bruguera is a Cuban
performance artist whose works challenge the Cuban government. This has caused
her activity within her home country to be strictly limited. Shakur was leader
of the Black Liberation Army and a member of the former Black Panther Party.
She fled the U.S. in 1984 to live in political asylum in Cuba. Shakur embraces
the freedom that she finds in Cuba, a freedom that is now threatened by the new
relations between the countries. Conversely, Bruguera exposes the inequities
and lack of freedom in Cuba.

Dissonance incorporates audio from
two sources: a phone call Bruguera made to her sister in January 2015, after
Bruguera was arrested and banned from performing a piece where she intended to
place a microphone in Havana’s Revolutionary Square; and Shakur’s reading of
her letter written to the Pope in 1998.

In May 2013, the F.B.I.
made Shakur the first woman on its list of Most Wanted Terrorists, causing her
to “drop out of sight” in Cuba since then. Both Bruguera and Shakur have been
hailed as freedom fighters but, by their respective country’s definition, they
are political dissidents.

Dissonance ​ invites the audience to
be a participant in the conversation of these two activists and simultaneously
attempts to involve the viewer in unraveling the political contradictions
buried between the lines of both statements against a “certain
power.”

Besides, the piece works
by involving the spectator not only on a conceptual but also on a physical
level: in order to listen to the work the viewer must kneel.

WORK OF THE WEEK XXVI