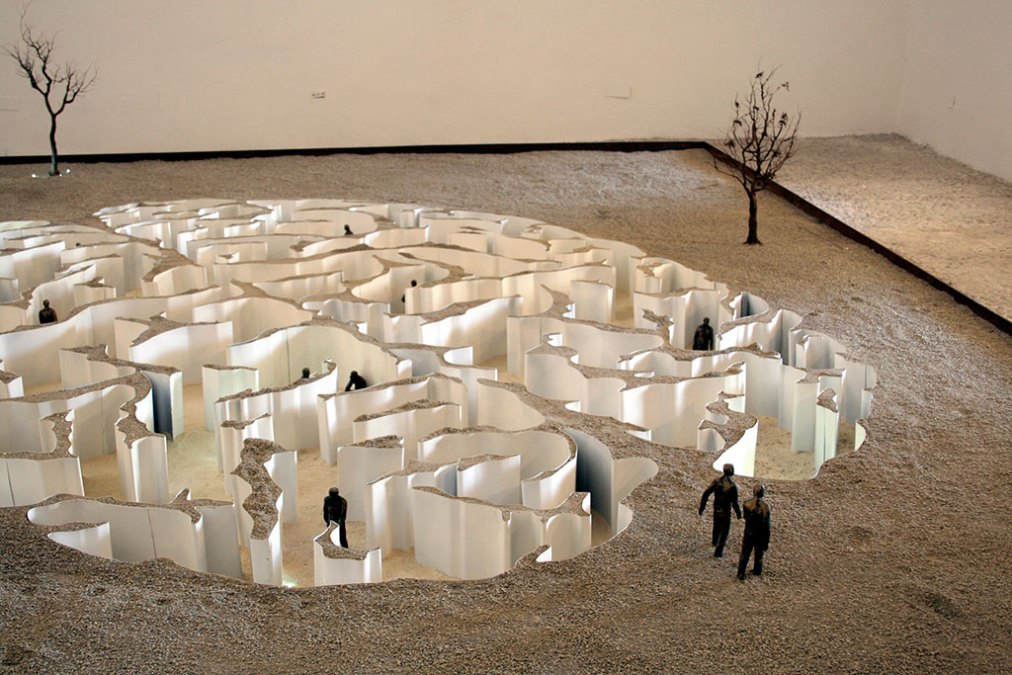 WORK OF THE WEEK LVI

Yoan Capote is a virtuous artist, mentally and craftily speaking. This conjunction gives him an enormous advantage. Capote’s work subsists under constant tension where everything seems to indicate seduction, in addition to the métier, resides. I am certain that his work is anti-modern in the sense that he avoids all theoretical notions and constructions of Modernity, or, at least, shreds them. I am referring to the confirmation of identity as fiction, to nomadism, to mental bifurcations, to anti-binarisms, and to the rhizomatic character of his proposals. In the same way that Hamlet cried out that time was out of joint, Yoan warns us about mental, and, consequently, conductible and object-sensibility de-centering. Accordingly, his works prompt hybrid prototypes.

One can say the mental structure of Western thought is a key that leads to his works. Madness, Paranoia, Stress…, these are works that illustrate that idea. Open Mind does the same. Open Mind is still a model but even in that stage, it’s an impressive work. In a statement written by the author he says:

The image of a Brain was carved in a volume of PVC, creating the design of a maze. The sculpture functions like a model for a public art project. The idea is to create an architectural space, which is opened to the access of any class of spectator from any kind of background (political, race, religion, culture etc… ). “Open Mind” is a project to build an underground park made with walls, constructing a labyrinth similar to the human brain and stimulating meditation while you walk through. There will be grass around the underground labyrinth and on top of the walls.

The project is ideal for an urban space, where the surrounding buildings allow one to view the people from above and look at them walking inside, like neurons moving and carrying information. lnside the installation, it will be minimal furniture. Meditative music, coming from the walls of the labyrinth, helps to create an environment of relaxation.

Human beings, like a neuron in possession of knowledge and information, become metaphors of our mind and our behavior. The urban characteristics of the work and the sense of transit intend to transmit an allegory about acceptance and the need for human reflection of contemporary urban life. A detail of the piece shows that one of the walls of the maze has the shape of the Cuban map and it could bring about interpretations about the situation of today´s Cuban context; but mainly, the work is a reflection about the human need towards tolerance and open-mindedness in a global world.