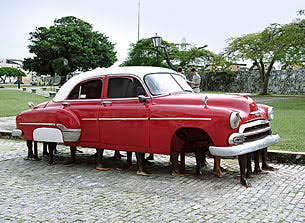 “The word “patera” is used in Spain, where Mariño lived, to identify the narrow rafts of balseros who, coming from North Africa, perilously cross the Mediterranean Sea to reach the coast of Andalusia or the Canary Islands. In La Patera, atop the numerous legs, the body of a vintage Oldsmobile car is placed, old American technology kept alive in Cuba by the twin forces of love and recycling. These big American jalopies not only work locally as taxicabs but also transport many people from the eastern provinces to Havana. The body of the American car, a symbol of both social prestige and the absence of Cuban technological renewal, will have to depend on the slow and disorganized movement of those feet, in a frustrated version of true progress, acceleration is impossible”. This quote was taken from https://africanah.org/armando-marino-cuban-american/

WORK OF THE WEEK XI