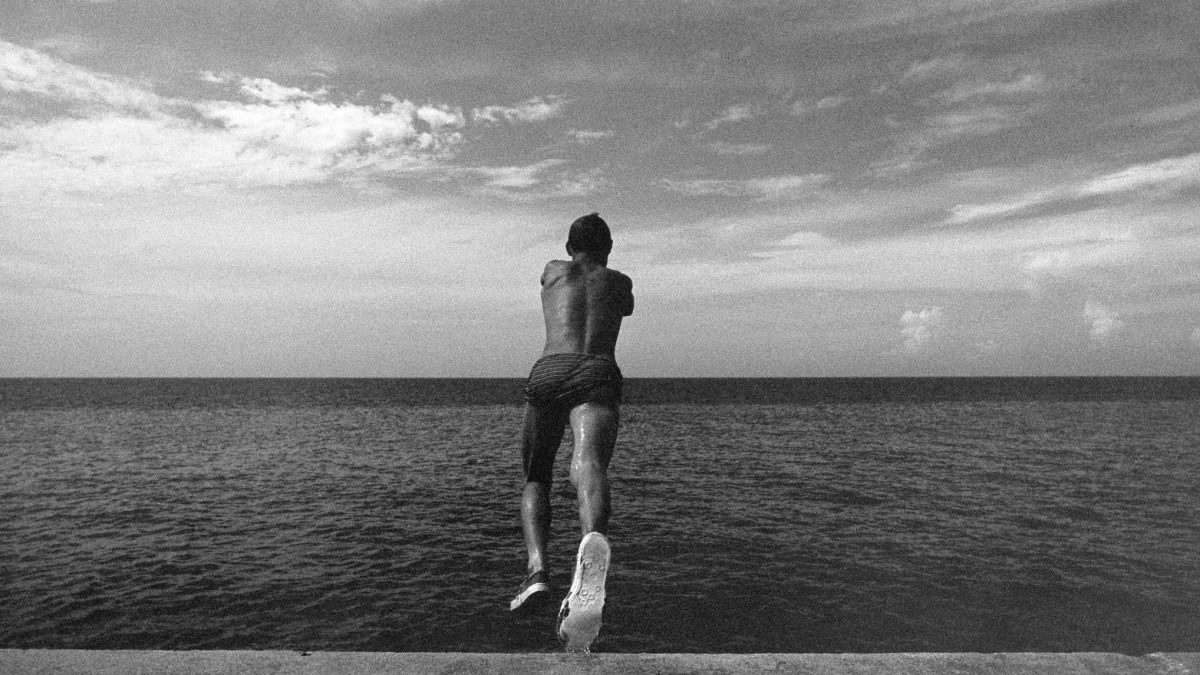 WORK OF THE WEEK XXVI

“Although smaller in comparison to the Mariel crisis, the balsero, or rafter, the crisis of 1994 was internalized at a deeper cultural level. Artists such as Kcho, Sandra Ramos, Abel Barroso, and Tania Bruguera introduced the concept of Cuba as a raft, separated from terra firma by the insurmountable breach of the waters. Each generation disinters its own dead: José Lezama Lima’s well-known phrase, “because to be born here is an unnamable feast,” was succeeded by Virgilio Piñera’s line, “the damned circumstance / of that water everywhere.” Faith in utopia sank, giving way to its opposite; art criticism and demographic studies reflected emerging concepts of diaspora, insularity, and transnational community.

Aguas Baldías (Waters of the Waste Land) is one of fifteen images that Manuel Piña photographed from the Malecón during the most critical years of the “Special Period.” A waterfront promenade marking the northern limit of the city, the Malecón was transformed—under the migratory impulse—into the most visible border between reality and desire. Inspired by T. S. Eliot’s The Waste Land, the series’ title is an expression of the artist’s own situation at the time. “I took those pictures between 1992 and 1994, during a very dramatic period in Cuba. I felt that I did not have many options left in my life nor in my work”.

While press reporters and moviemakers documented the spectacular aspects of the crisis, Piña disavowed the documentary basis of his series through a dispassionate attitude: he was not interested in social chronicles. His focus on the Malecón, with its cracks like tattoos left by time, its condition of the insurmountable horizon, or as the starting point for a possible journey, allowed him to reveal an essential aspect of the Cuban soul: certain awe for the vastness of the space surrounding the island. The restrained chromatic range was determined both by internal urgency and by lack of film. “I shot the series in black and white because it matched my feelings at that moment, and because of the scarcity of materials… I overexposed the roll and then developed it, so the grain would look more dramatic” (Sanders, 2002, 5). The results were stunning—as if Ansel Adams had shot the fall of Berlin in 1945. The images of humanity overpowered by the sea do not express a romantic identification, but rather extreme frustration in the face of an unbridgeable gulf. The ocean was the claustrophobic border that eliminated escape and, at the same time, deferred all hope”.

This entire note was written by Abelardo Mena and published at the Farber Collection website.