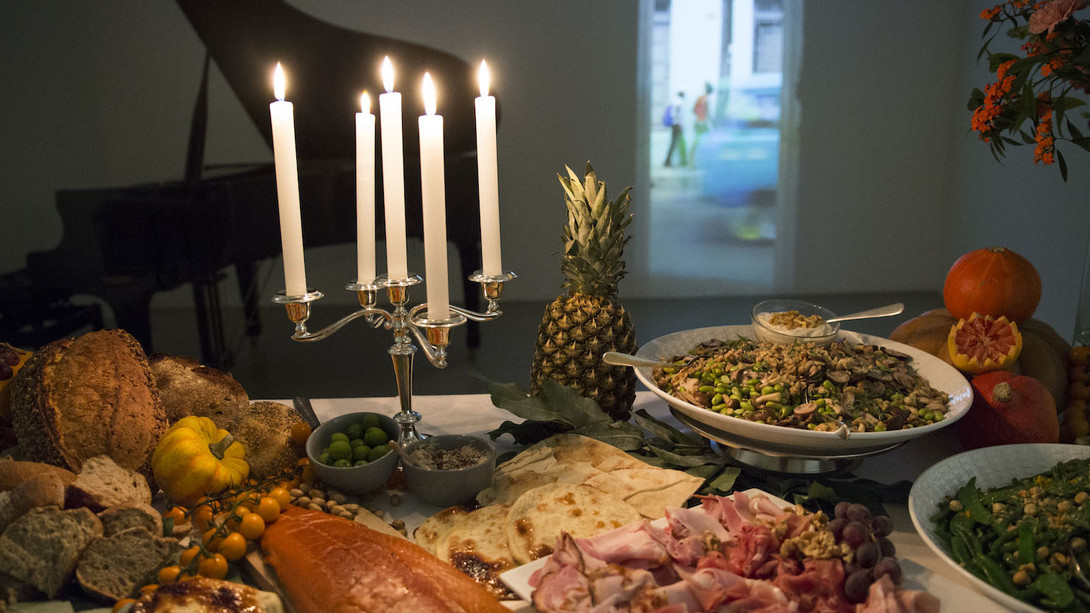 FEEL THE LOCAL: Inti Hernández and the suns of his moral world

prevents the advantage and
fullness

of the individual, it is
not such justice;

but one thing is fair individual
advantage

and the other the individualism

that is antisocial and unfair.

Much like Kanye West in his video Runaway, the table that Inti has laid to open his personal exhibition is outrageously perfect, tempting the public with a lavish dinner-turned happening. But this is just a detail, technically a detail of a video installation, entitled ‘At the head of the table the people sit’. The other part is formed by a video projection of people passing by without entering the house where the “real” bacchanalia happens. Though full of delicacies, Inti’s dinner is far from the obvious racial Manichaeism as shown in the video of the famous American singer and aims at the very heart of the art world, pointing out the cynicism and the level of alienation with which the elites perform: indifferent entities that happily leave behind a path crowned with myrtles (1).

Inti literally served our irresponsibility and hypocrisy on a silver platter. His slap is naughty and noble – and even an accomplice. Cotidiana is the title of this exhibition combining several confluent subjects: elitism and the experience of the community; the metaphysical condition of time; the relationship between social responsibility and free will; and lastly, illusion. These conceptual rivers flow through each of the works included in this exhibition, becoming a sort of archeology or inventory joining to recreate a – fictional (2) – Cuban home on any given day. Let’s say that this exhibition may very well be the minimal and ideal scenography of our classic theatre play Aire Frío from Virgilio Piñera. It could equally be a manifest about the new entrepreneurial spirit and the pragmatism of some Cubans, today. Cubans who are in disbelief of epic stories and who are forgetful of history, yet would not hesitate to follow the money trail, like those patriots eager to reach ‘La Quinta de los Molinos’ to receive the promised payment during the War of Independence.

Keeping things in perspective, more than a mere collection of Useless Object (3), Cotidiana is an exhibition about the Cuban attitude. These objects might come across as exuberant, verdelicate and superficial, however by discarding their useful nature, these objects address the swamp “full of indifference, irrelevance, nothing vital” (4) that is invading our lives. Therein lies the road to a civic death, with the nullpunkt and “killing time” as one of its most recognizable qualities. The Cuban experiences time in a non-measurable dimension which causes inoperable absurdity and cynical patience. Philosophy speaks of saeculum, “a length of time essentially vague as everything that is alive has a floating limit” (5). This, in combination with inaction – or a collective action without a clear purpose – turns time into something rigid, static, passive and rusty. The time of the Cubans is a time that belongs perhaps to aesthetics, as the Balance Cubano, and this time (ours) speaks of survival “which is no longer a meaningful life, but just its leftover, skeleton corpse or fossil” (6).

Did Inti sense that all of that was coming? I am sure that he foresaw how things would unfold .Maybe his stay in The Netherlands and his experiences in DUPP (7) (with its inclination towards performance and public spaces rather than the usual gallery circuit) trained his clairvoyance. Long before Chanel, Inti launched his own Propia iniciativa (Proper/Own initiative) at Paseo del Prado, a true statement about the forthcoming Cuban entrepreneurial spirit and the role of the individual in the new socio-cultural dynamic. Inti, the artist and the entrepreneur, is sharing lessons about the usefulness of virtue. Speaking of new types of leadership and showing ways to clean up aesthetically and ethically. A public servant, in the best sense of the notion of Cuban tradition and thought.

In 1968 Borges gave a lecture on Don Quixote in Austin. Among the many flatly brilliant ideas he said “after all there is one thing we do not want to forget, one thing that gives life now and then.” He only lacked to say that this was the quality of the endearing, often also associated with the intimate, familiar and homey in a filial sense. The work of Inti Hernandez, at least all the work I know from 1994 through today, is crossed by this emotional condition that leaves us “a final feeling of happiness” and tenderness. And perhaps the reason for this resides in the new humanism that he is founding, based on a poetic and noble relationship with everyday.

*More images in the Spanish version

(2) I emphasize the term “fiction” to separate the bluntly gesture of Inti with the collecting habits of the Gabinete Ordo Amoris, which was more tacit in its census of our material culture and insisted on Cuban practice of “for getting by” or provisionality as core of their project. María Antonia Cabrera Aruz has built an exhaustive collection, Cuba Material which mission she defined brilliantly: Cuba Material is the archive of the Cuban material culture and the practices and meanings related to it. It’s also a collection of objects, documents and, Cuban fashion during the Cold War.

(3) In these and Balance cubano Inti comes back to his work with wood, one of the distinctive features of his work back in the ’90s, when he won the Academic Award (1996) and the work of marquetry turned his paintings into sculptural pieces. Wood allows him a warm touch in the design, linked to manufacturing and handmade.

(7) DUPP: From a Pedagogic Pragmatism. The exhibition Con un Mirar Abstraído may be considered prologue of Propia Iniciativa (‘Self/ Proper Initiative’). Inti knows well how the experience of the ego can be made subject to the experience of us and vice versa.

JUMPING FROM THE CLIFF WITH OPEN HANDS*