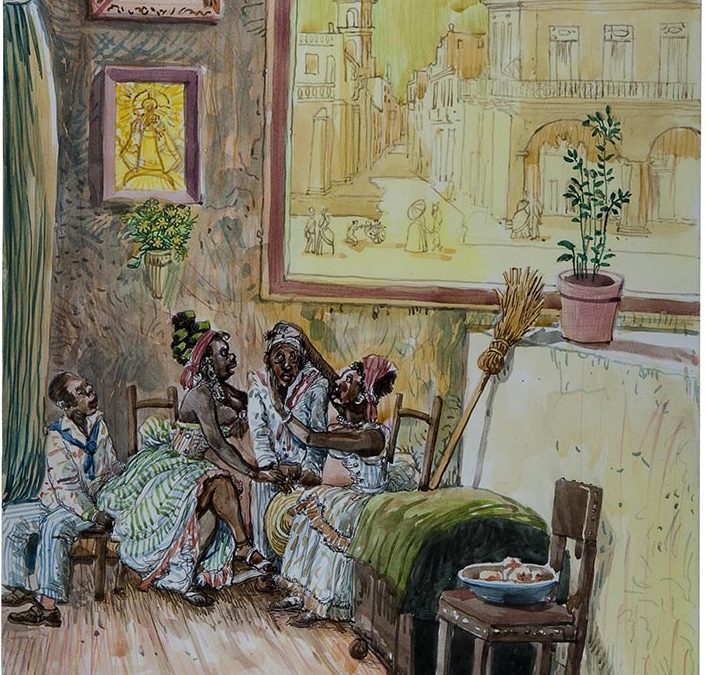 Of all the Cuban artists of his generation, Douglas Pérez probably has the most extensive and varied repertoire. Although he has been inclined to dwell on the history of Cuba, in which the black slave is an essential figure, his fascination for science fiction has recently led him into the future, into imaginary history, without abandoning the representation of the local iconography that characterizes his work. In the first case, he is not trying to reflect precise historical events, but rather to preserve the tone or style of past times. Many of his paintings and watercolours seem to recreate Cuban colonial scenes in the context of local colour, as if they were appropriations from painters and printers of the 19th century, mostly foreigners such as Hipólito Garneray, Federico Mialhe, Eduardo Laplante or Víctor Patricio de Landaluze. His repertoire is similar to that of those artists: groups of house slaves in interiors or in plazas and markets; characters dressed in the attire of members of the African cabildos on the feast of the Epiphany; ancient horse carriages (called quitrines and calesas) with coachmen dressed in rich livery and knee-high boots, and a wide variety of objects that seem to be simple reconstructions of Cuban colonial times. But when we look closer, we discover alarming anachronisms: a picture of Ché Guevara, an electric rice cooker, an airplane, a man filling used lighters, a parabolic antenna, a TV set, a Russian nested doll (or matrioshka), an offset print of the Virgin of Charity of El Cobre or the Sacred Heart of Jesus that are common in our homes today. These artefacts are meant to launch us back from our daily contexts to meditate on the complex and contradictory nature of our national identity, which includes many negative elements from our past (not always overcome) or successive pasts. We realize that the slaves represented in his works are present-day black men and women, or perhaps Cuban men and women of any colour.

Another remarkable characteristic of Douglas Pérez’s work is his vivid colour. His works are always attractive and pleasant, devoid of sombre or depressing atmospheres. Such enjoyment of lively, exuberant colours has been a characteristic shared by many Cuban and Caribbean artists and is apparently influenced by our climate, the intense brightness of the tropics, the exuberant nature of our vegetation and skies, which reflects upon our bustling, extroverted idiosyncrasy. But in Douglas’s case, this may also be the result of the picturesque images that he uses as a reference to record our typical ambiences and characters and our local colour. For those painters and printers that reflected colonial reality from the perspective of the powerful, the landlords and sugar mill owners, the life of the popular sectors, especially the slaves, seemed an exotic scenario, a feast, eternal carnival, rather than the hell that it actually was. This carnivalesque, folkloric exoticism was transmitted to our bufo theatre (Cuban vernacular theater) through the stereotypical representations of el negrito (blackface or little black man) and la mulata (the mulatta) who contaminated our understanding (or misunderstanding) of the human factors in our own society. Hence the festive character and the colouring of Douglas Pérez’s painting has the intention of mocking or parodying that which we should not disregard. The colouring of his paintings and watercolours are an attractive envelope to make the true merchandise that has been smuggled in more enticing: his critical, scathing reflections on our history, the current state of our society and, in particular, the black Cuban population.

he meticulous and detailed narrative style of Douglas Pérez sets him apart from most of his Cuban contemporaries who are generally more prone to laconic, synthetic discourses, influenced by the conceptual trend of the 1980s in Cuba. His aesthetics are even far removed from those of painter Pedro Álvarez who is possibly his closest antecedent and with whom he has many other points in common.Douglas’s paintings are always multi-coloured, full of characters who are carrying out a wide variety of tasks and surrounded by an endless number of heterogeneous elements belonging to different periods. Since his narrations tend to be ongoing, Douglas distributes them in extensive series, another of his characteristics. His desire to narrate is inexhaustible, and he takes advantage of each chapter of that long chronicle with retro appearances to focus on problems in our present, drawing on the complicated history of our social and cultural identity. Douglas Pérez is an informed chronicler of contemporary Cuba, who comments by parodying the languages of the past.