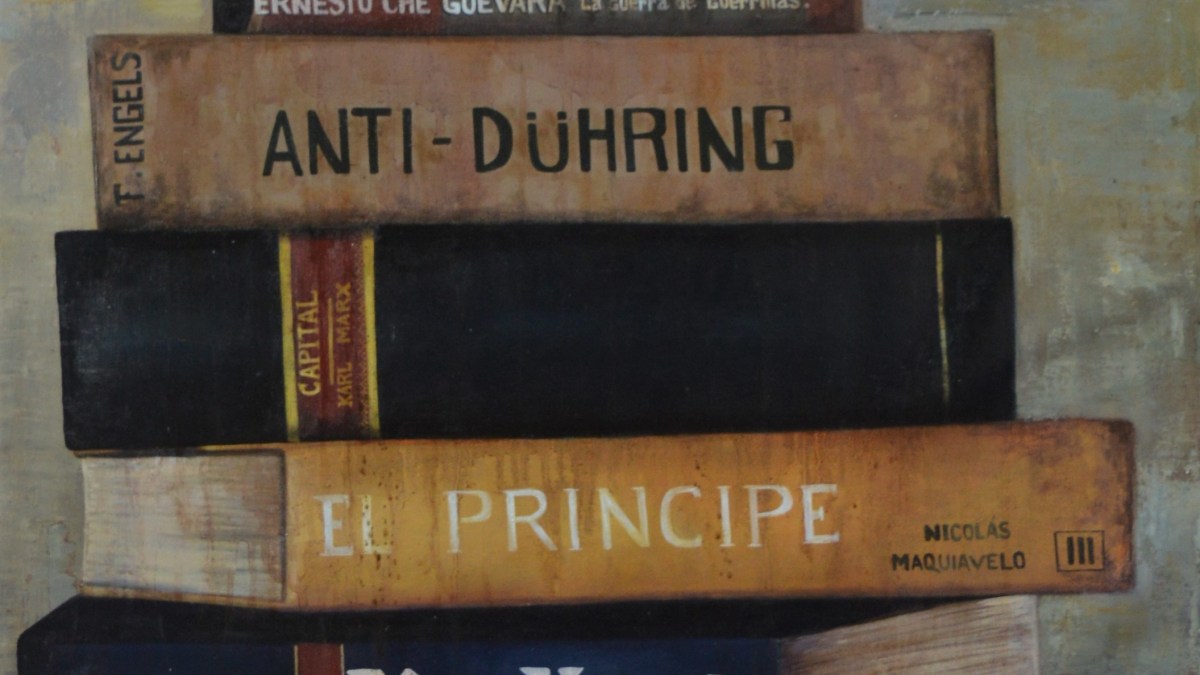 In this oil painting of 140 by 160 centimeters, independent artist Cesar Castillo visualizes the ideological manipulation through a metaphoric mountain of classic political literature. Not only is Cesar an independently operating artist, but the promotion of his pieces is also predominantly handled through his Facebook page as an online gallery. However, the painting is also part of an online curation by the group The Señor Corchea BackroomArt, created by Elvia Rosa Castro.

According to the curator of El Sr. Corchea, La montaña mágica is a conceptual painting that emotes the journey through constructions of power and its supporting literature, “where in many cases power is more attached to a cinematographic script than to an ideology applicable to reality without catastrophic consequences.” (1) Consequently, Castillo creates a kinetic relationship with the painting itself and the perspective of the viewer, whereas the gaze follows an upwards or downwards trajectory in response to the hierarchical structure created in this pile of books. Whether the viewer begins from the bottom of the stack and works their way upwards, or the opposite, the ability to observe or interpret this piece involves a mobilized gaze. Starting from the top and then downwards, the element that is most reflective of physical humanness, is a golden trophy. This trophy is not just any award: it is an Oscar. Those who receive an Oscar are people in the film industry who merit extreme artistic or technical recognition. Thus, the trophy’s position on the top of the pile offers various possibilities for interpretation. Firstly, if it is the starting point of the viewer’s gaze, Castillo is inviting the reader into a theatrical, cinematic realm of power. The Oscar represents the winner of an industry-wide competition fueled by filmic realizations; therefore, it is possible Castillo is suggesting that at the peak or top of any hierarchy comes great pictorial, visual constructions of reality. When one thinks of cinema or the movie industry, we think of plots, characters, scripts, props, costumes, and design. Each of these elements are fabrications of someone’s idea of a story or narrative. Consequently, this trophy presents the viewer with questions surrounding the constructions of realities, histories, and narratives through this materialistic award and industry that possesses significant power. An award in and of itself creates a dialogue around superiority, given those who receive such recognition are ranked above others. In this case, if the viewer or the artist meant to have this be the starting point for interpretation, the viewer may imagine the rest of the mountain of books as part of a cinematic or hierarchical project. Alternatively, if this is meant to be at the end of the viewer’s gaze by starting at the bottom and working their way upwards, it is as if the journey to the top of the mountain is a cinematic experience itself and thus rewarded and recognized by an Oscar.

Continuing with the upward to downward gaze, the first book on the top of the pile is La guerra de guerrillas written by Ernesto Che Guevara. This work represents a recollection of Che’s reflections on the Cuban Revolution. As a Cuban, Castillo presents this as the first book of ideologies at the top of the mountain, perhaps to showcase its permanence in his life and his grappling with Cuban historiography and identity. It may be a testament to the unwavering dominance of Revolutionary politics and governance in Cuba. However, Che’s placement at the top of the mountain just below the Oscar trophy may reinforce Castillo’s mockery of Revolutionary ideology and political legitimacy as that of a fabricated storyline or fictional film. Next, Castillo paints Frederick Engels’ Anti-Dühring, which is a Marxist critique of the social democrat, Dühring, and his approaches to philosophy, natural science, and historical problems. (2) Defending a Marxist agenda, Engels organizes his work into three sections on philosophy, political economy, and socialism. Following this Marxist work, Castillo includes Capital or Das Kapital by Karl Marx, which is a compilation of critiques regarding the political economy of capitalism and its processes of production and materialism. By leading with Che and having two Marxist works underneath him to bolster his ideological and authoritative position, Castillo visually represents the foundational roots in terms of written, political-economic ideology that formed the principles of the Cuban Revolution. At the same time, the theme and reminder of the cinematic, fabricated hierarchy reinforces his discontent with these communist manifestos and power structures.

Next, Castillo paints the Spanish edition, El Principe, or The Prince by Niccolò Machiavelli, an Italian theorist in the 16th century. In his list of advice for princes and members of royalty, Machiavelli suggests that to maintain his power and royal status, a prince “must learn how not to be good and use or not use this knowledge “according to necessity.” (3) Following this totalitarian-inspired agenda, Castillo includes Adolf Hitler’s autobiography, Mein Kampf, which continues the pattern of authoritarian, exclusionary ideology. Despite this turn to other theorists that are not necessarily bound to the pillars of Marxist thought, Castillo depicts the Spanish edition, El imperialismo, fase superior del capitalismo, or Imperialism, the Highest Stage of Capitalism written by Lenin. Inspired by Das Kapital, Lenin argues that the political and economic oligopolies inherent to capitalism, intrinsically insert colonial and imperial controls of power in capitalist societies. Fifth to the bottom, Castillo includes the Spanish edition, Los orígenes del totalitarismo, or The Origins of Totalitarianism written by Hannah Arendt. Strongly against imperialism, racism, and anti-Semitism, Arendt argues that “totalitarian regimes, through their pursuit of raw political power and their neglect of material or utilitarian considerations, had revolutionized the social structure and made contemporary politics nearly impossible to predict.” (4)

Having this work follow an edition of Lenin, the foundational layers of this mountain become more outspoken towards broader insertions of power through means of capitalism, imperialism, and totalitarianism. Reminded that these ideologies are part of a visual simulation like that of a film, Castillo’s inclusion of Arendt may reinforce the hypocrisy of Marxist agendas that preach equality and opportunity but embody totalitarian regimes of rule. Following this layer of totalitarianism, Castillo adds Fouché, written by Austrian writer, biographer, and social activist, Stefan Zweig. Fouché recounts the life of “the influential French politician Joseph Fouche, who played an important role in France in the late eighteenth and early nineteenth centuries, that is, in the turbulent period between the French Revolution and the Napoleonic Empire, and the return to the monarchy through which the French state passed during those years.” (5)

Alluding to this turbulent time of terror, Zweig defines Fouche’s efforts as a restoration of the monarchy. Thus, it is possible Castillo includes the glorification of this French theorist because it reveals another form of authoritarian rule, the monarchy.

The third to last book is the children’s novel, Alice’s Adventures in Wonderland written by Lewis Carroll. This children’s story is above The Communist Manifesto by Frederick Engels and Karl Marx. Perhaps Castillo has The Communist Manifesto nearly at the base of the mountain to assert that the Marxist ideology was at the forefront of the Cuban Revolution. However, to have this coupled with a children’s story, Alice’s Adventures in Wonderland ridicules the legitimacy of this political and economic ideology. At the very bottom of the mountain, the thinnest, and smallest book, Quotations from Chairman Mao Tse-tung, also known as the little red book, is a compilation of speeches and writings by Mao Zedong. To have this minuscule and skinny work as the foundational base of the ideological mountain, Castillo infantilizes and critiques the political ideologies of these leaders and parties. Realistically, this thin layer as the base for this monumental structure presents extreme instability and uncertainty, much like the promises of these movements and thinkers. The unrealistic strength of this mountain’s base reiterates the fabricated and picturesque constructions of hierarchies as seen with the Oscar. Additionally, the only works kept in their original editions are the editions of Che, Hitler, and Engels. Each of these leaders represents extreme political ideologies and forms of government from the Cuban Revolution, Nazi Regime, and Marxism. Returning to the theme of cinematic performance and construction, one can configure these names as the headliners to the spectacle that are their own ideological formations and rule.

As a final point of consideration, the background of this piece is rather mundane and blurred. At the same time, the colors utilized are neutrals, which play into this idea of uncertainty or a lost sense of identity and individuality. On the other hand, the use of neutral colors in the background landscape of this painting may suggest a blank canvas or storyboard that is waiting for the viewer to create their own meaning out of the painting or these ideologies. Lastly, the mountain of books appears to be constructed atop a wooden desk. The inclusion of a desk reinforces the ideological and scholarly attributes of these leaders and principles. However, with the cinematic allusions, perhaps Castillo portrays this characteristic as a mere prop to critique the legitimacy of these ideological practices and power structures.

(2) To find the important background context on Engle’s Anti-Dühring, I utilized the following website, https://www.marxists.org/archive/marx/works/1877/anti-duhring/

(3) To find the important background context on Machiavelli’s The Prince, I utilized the following website from Britannica, https://www.britannica.com/biography/Niccolo-Machiavelli/The-Prince.

(4) Also retrieved from Britannica, I needed to reference this website for the specific biographical information and context on Hannah Arendt’s The Origins of Totalitarianism. For the full resource, please see, https://www.britannica.com/biography/Hannah-Arendt#ref17737

(5) This quotation is my English translation from the information on the figure Joseph Fouche that I found online in this biography written in Spanish, https://www.thriftbooks.com/w/fouche_stefan-zweig/1505444/item/47749455/?gclid=CjwKCAiAg6yRBhBNEiwAeVyL0IdNpOMaSnQBiow8d-Axgwckoc7aRf77P4E4sRSSPcoT4n_WmuBNBRoCzGwQAvD_BwE#idiq=47749455&edition=59098208

*A fragment of Lydia Millhon´s text “The Power of Words”. She wrote it as part of the Hispanic program at Georgetown University. She was accepted for the Berkeley University Ph.D. in Hispanic Languages and Literature.