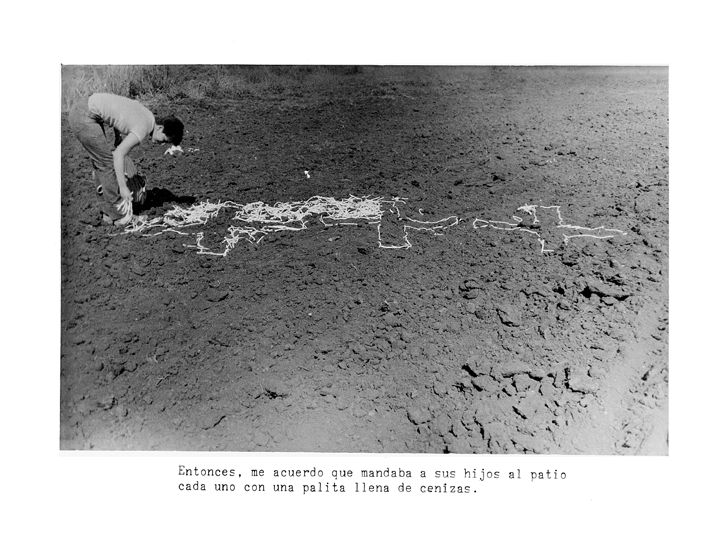 Martha María has asked me to talk about her and the moment she began to make art, rather than her own work because already others have done it and quite well (these are my words, not hers). We’ll see how it goes.

I met her through Flavio Garciandía when I organized him an exhibition at the Transitory Halls of the Provincial Museum in Villa Clara (Santa Clara) in September 1983 and since then I used to visit them, from time to time, when I went to Havana for some reason.

In one of those visits, she invited me to a photo shoot in the Havana Woods, where she was to randomly insert several long, previously rolled strips of paper amid the vegetation to carry out her last project, later known as Aguas (Waters).

It was quite gray that cold January morning of 1974 and the light was perfect to photograph the event: almost a performance, almost an installation, almost an expanded and ephemeral sculpture. A landscape was being created on-site. Now I think it has always been landscape what
Marta María has done, be it a physically given landscape (cross-shaped ashes on a cultivated land near Caibarién or these white paper cascades on exuberant and monochromatic vegetation in the center of Havana), and also covering her body to build a cultural (ethnographic, sculptural,
feminist, intimate…) landscape. Without trying to make the landscape her main target. They are possible skewed readings allowed by Paisaje 82, an institutional event that broke the paradigms of what Cuban visual arts commonly called landscape.

When I said the light was perfect to take photographs it was not related to the idea of making photographs as such. We were not aiming at photography as “art”, but trying to create conditions to use photography as technical capacity to capture an action (cascades of white paper in a green environment) that perhaps at another time would interest someone if the color were interesting. It would be a new kind of landscape, different from the one conceived until now in the provincial island and which not everyone would approve of. At this point, here comes an anecdote.

When all those paper strips had been thrown in the way that would achieve the artist´s purpose,
something happened that I now recall as funny. In the midst of our efforts in one of the chosen
spaces, we had not noticed a small lane hidden by those dark bindweeds that, like parasites,
cover everything in the Havana woods. As if by magic, a “funny” rolling beetle, a white VW,
rolled through the center of our landscape, through our horizon and on top of it. It disappeared,
but immediately moved backward and remained in the center of our vision. It was then that
a huge man of dark complexion (a mulatto) wearing dark glasses came out of it and examined us without embarrassment, stepped again into his VW, and disappeared. We all knew what was to follow that fleeting and incidental visit. Not everyone had a VW in the Cuba of those years.

Without hesitation, a strategy was implemented on the spot. I, having no camera, put the used rolls in my pocket, while Flavio and Marta put other empty rolls in their cameras; everything was done very quickly, knowing that they would visit us again. And it had not been long, not even five minutes when a police car appeared with two policemen making gestures and loudly asking what we were doing. They were told the truth: taking pictures, but that always aroused suspicion in Cuba.

I don´t know how they managed it but they got closer to us, and even after having seen the paper cascades on top of the natural vegetation and heard the explanation about their meaning they did not understand; they could not understand because their codes were different. Finally, they asked for the identification cards, writing down what they had to write. In my case they asked what I was doing in Havana and even what hotel I was staying in; I showed them my booking card in Hotel Sevilla and that seemed to satisfy them. Nevertheless, in the end they asked for the rolls inside the cameras. With the information about our ID cards and the confiscated loot (the photographic rolls), they left, graceful and satisfied with the accomplished routine mission.

We gathered up everything and left. Nothing happened afterward, and some of the photos that today only show white paper cascades and rivers on the typical bindweeds of the Havana woods convey this contextual and immaterial, invisible plus of a period. In the end, they are evidence that the alleged testimonial nature of photography is a fraud. The policemen did not see art because, for them, art was surely something else. Or perhaps, if they had been told it was art, they would have considered it dangerous because it was odd. They did not understand it and did not conceive it as art; in fact, they thought we were fooling them. They solved it by reporting and carrying the evidence.

Situations such as this one abounded in the entire island when the new breed of young iconoclasts began (they had already begun) to participate outrageously in the national visual arts scene. Larger in number than the policemen and security officers, who knew how to proceed under such circumstances, the inept culture officers and the artists from other times, educated under other codes or patterns for the interpretation of art, astonished, felt as if the earth would open under their feet without being able to “explain” what was happening.

Marta María had a good contextual moment to produce art. particularly with the existence of institutions to dialogue with (the Visual Arts and Design Division of the Ministry of Culture and the Higher Institute of Art), open to the new forms of relating to the arts –in our case the visual arts– and to the producers, mediating situations of misunderstanding, such as the one we
faced on that gray January morning of 1974, in the woods of Havana. After Mariel, control strategies began to look differently. The artistic contexts of Latin America and of the European and U.S. American power centers were also different from what was being made in the island. Neither art nor the artists are independent from the contexts in which they are inserted.

Something highly beneficial for her was the art college where she did her last studies: the Higher Institute of Art (ISA), which took a significant turn during her stay. ISA was created almost at the same time as the Ministry of Culture, an institution that from the beginning tried to restore culture to the place from where it had been vanished and distorted since the ´60s, reaching its paroxysm in the Five-Year Gray Period (1971- allegedly 1975). ISA was molded according to a rigorously academic, but even worse, Soviet criterion (there was no alternative at that moment when everything depended on the Soviets); however, those first graduates were to change this
state of affairs and in the ´80s a new day would dawn. Artists of the height of Flavio Garciandía, Consuelo Castañeda, José Bedia… were capable of breathing other airs into the Soviet-molded academy in accordance with certain strategies of governmental flexibility where the opening to other glances was to have an impact on the youngest ones. Let us recall that Mariel was not just an exodus; it was a calling of attention to the leadership which meant how people were displeased with the established system. The still pre-modern Soviet academic canon was rapidly and furiously replaced by a dynamics of action and expanded conception, with an approach to
art from multiple angles, approaches, and products soon labeled as postmodern.

Despite this dynamics of changes, Marta María is generally “cataloged” –a never abolished
modern mania of classifying everything in fixed compartments– as a photographer, as if photography were just one and making photographs her motto. She is part of that turn taken by Cuban photography of considering and using this tool only as testimony and propaganda weapon, something very typical of the early ´60s. Many like her went beyond the purely syntactic value of the real photography and crossed over the threshold of the click, the field profoundness and the light contrasts as the precise instant, appropriating photography as medium and turning it into post-medium.

Marta María was a pioneer of what some people today call post-photography. We can say the same thing about Rubén Torres Llorca and Arturo Cuenca. Others appealed to photography as support-reference to evidence concepts (José Bedia, Leandro Soto…) or simply manipulated
it toward greater estheticism (Marucha, Gory, Fors…). We recall the ephemeral work made with nature on the beaches and documented (collected) with a purpose beyond that of testimony by Grupo Hexágono (Humberto Castro, Consuelo Castañeda, Tonel, Sebastián Elizondo, Abigail García, and María Elena Morena) or in the woods of Jaruco by Gustavo Pérez Monzón.

It was a time when photography was beginning to be something else. It had been taking shape since the previous decade when several artists like Flavio Garciandía, Rogelio López Marín, and others appealed to photographs to make their photorealistic paintings, the name given to the Cuban version of hyperrealism. We should also bear in mind the presence of photography in the Grand Prix granted to José Bedia in Paisaje 82 for a work based not only on a National Geographic aerial cover photograph of an Amazonian river but on aerial views of other rivers from that zone as additional or referential documentation. Another artist awarded at this Salon was Gory when he added photographs taken in Cayo…, located in Cienfuegos Bay, to achieve a surreal atmosphere.

Something to be pointed out within this Cuban visual arts scene from the early ´80s only with reference to photography is that most of the protagonists of the change of paradigm were not properly photographers. They were, above all, painters, except Marta María, who at a certain point made ceramic pieces. She took advantage of photography to do other things.

*This text was included in the catalog for the exhibition Firmeza by artist Marta María Pérez at the National Museum of Fine Arts, Havana. (For more images click at the Spanish version).