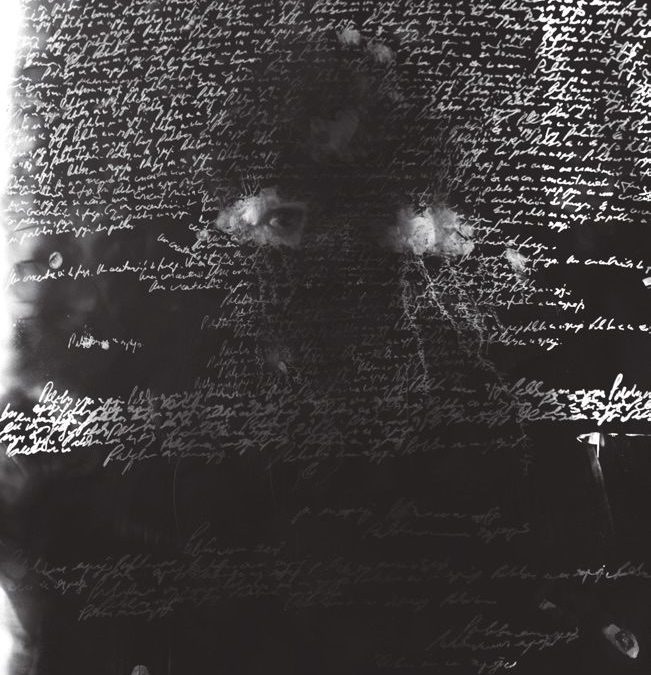 From my point of view, Marta María is not a photographer in the traditional concept of photography. She appropriates the photographic technique (because photography is not an art in itself, but can become art under certain circumstances) to achieve other purposes, particularly concepts. If making photographs means pressing the shutter, the credit belongs to others, to Flavio in many cases. Those of us who are familiar with her method or with some of her behavior strategies know how she organizes her settings: first, from the point of view of the scene decoration (the “pre-photographic” ritual that involves the props, the selection process of already existing objects and the making of others created by her; the makeup, the set design itself or the organization of all the objects involved, the lighting…) and, choreographically (the other ritual focused on her body, located in a given space. Then comes the post-production, which today would be very easy in the era of computer technology, but which was not
so in the 1980s and early 1990s.

I see her as a visual producer that makes conceptual landscapes. To a great extent, she disdains photography, plain photography as a medium, and places it on a different level: makes it a post-medium. And not only on top of the “truly” modified “true” landscape (the ashes forming crosses on the ground like a magic invocation on site) but over her body, as support to build another kind of landscape.

Marta María was a pioneer (among others, not many) in those paths of Cuban visual arts constructed on the basis of ethnographic or anthropological searches, which is also a characteristic of the period beyond our insularity. But already in the works, she has made on her body and with photography as support for public vision, other geographies such as the feminist (in those days not that strong and extended) were mixing with the religious ones of African-Cuban origin, even with those only patriarchal stereotypes, those of the closed cults, like the Abakuá.

As happens in Cuban santería representations, in which the making is free and demands much creativity, Marta María organizes bodies in her spaces, the hybridism in the representation that
greatly characterizes her visual production and which emerges from the late ‘80s and develops in the ‘90s. I introduced her to José Seoane Gallo, a distinctive, long secluded scholar, ethnographer, and anthropologist who kept invaluable manuscripts particularly in relation to myths, legends, and customs…particularly about the center of the island. From that moment on they became friends, making clear the need for listening to what others know and have made with regard to what one is trying to do.

This pragmatic premise (from the semiotic point of view), the experience and knowledge of the others grant her work a conceptual solidness that is not exhausted in the visual effect of what is presented. Her work is a highly aesthetic product when we compare aesthetic with visual and visual with beautiful: the delivery of the product without shocking elements, of course, for certain glances. Likewise, neither does her work become an ethnographic “document” (a collection of knowledge on the Cuban nature, as Samuel Feijóo could have proclaimed), being in the first place an artistic proposal that nourishes from very personal experiences.

The above said illustrates very well the situation of those young artists who in the first half of the eighties assumed positions that were close to the ethnographic or anthropologic searches: Juan Francisco Elso, José Bedia, Ricardo Rodríguez Brey, Leandro Soto, Rubén Torres Llorca (indeed, from the moment when he speaks of a behavior constructed from the cinema), and Gustavo
Pérez Monzón, with his teaching innovations…Later followed Olazábal, Belkis Ayón, and others… There was a need among them to explore what some called cultural roots –“history” in the case of Leandro Soto– and thus contribute to design a hybrid and pleasant Cuban-ness beyond
political opportunisms scheduled by the power with its castrating speeches.

The new aesthetic presentation of their searches, in many cases with ideas supported by other disciplines and always combined with the personal element, made the work of those young people find recognition as a distinctive cultural, generational product that had nothing to do with previous moments of the Cuban visual arts. On the other hand, there was a new public, capable to appreciate all that with unwonted enthusiasm, a spectator connected to what he was seeing and who interpreted in his own way, an emancipated spectator (Rancière), very distant from the officer who snatched away the photographic rolls and never understood those white paper strips on top of the green bindweeds of the Havana woods. Without tolerance and
support of cultural institutions with power, without a valuation that would encourage a
certain criticism, and without those receptive publics it would not have been possible to
achieve anything, even if the acknowledgment came from cultural power centers abroad who recognized what was close to what was being made in their circles, and who, for many reasons, found it impossible to understand that it could happen in the island totally surrounded by water.

Something must be present along with this story, particularly as refers to Marta María, and that is the determinant visits of an artist that comprised and announced those searches and those new representations of the very new ones –Ana Mendieta– and of a “pedagogue”: Luis Camnitzer. Ana
transmitted readings, commented on her experiences, spoke about her method, and all listened to such an extent that, a long time ago, Gustavo Pérez Monzón mentioned Ana Mendieta to me as the person who taught him to document everything, and above all, to treasure it as part of the
making, of the creative act, and to value the very act of documenting (typical of an ethnographer, of an anthropologist). She, with the traumatic burden she was carrying, favored the construction of a reading that differed from the no less traumatic readings we were dragging of our history, of the island.

Camnitzer, in turn, offered legalizing support. With his cultural expertise and institutional prestige, he supported the iconoclasts to the point of promoting them, sponsoring scholarships, or simply critically commenting on the cultural product whenever he could. These actions make us conscious of the need to make readings, not only with works and artists, but also through the other components of the art system, of the art involved as a whole and never out of context.

Today, those creative groups that made up a segment of the Cuban art of the early ´80s, which at times only met at their poles, but who (most) other times overlapped themselves as palimpsests, leaving many edges still to be read, may be seen by other generations with demolishing positions as mimetic exercises typical of the cultural peripheries that in the end shut themselves off in their own discourses. As those who were applauded by the centers of cultural power because what they did approached what [those centers] were doing or conceiving as art; and that having exhausted the magic, everything vanished. However, they do not see that the schism they promoted was never stitched, not even by the boosted cultural exodus of the ´90s. Life was always lived at razor´s edge and different things were always made, provided ‘different’ is understood at one’s will.

*This text was included in the catalog for the exhibition Firmeza by artist Marta María Pérez at the National Museum of Fine Arts, Havana. (For more images click at the Spanish versions).