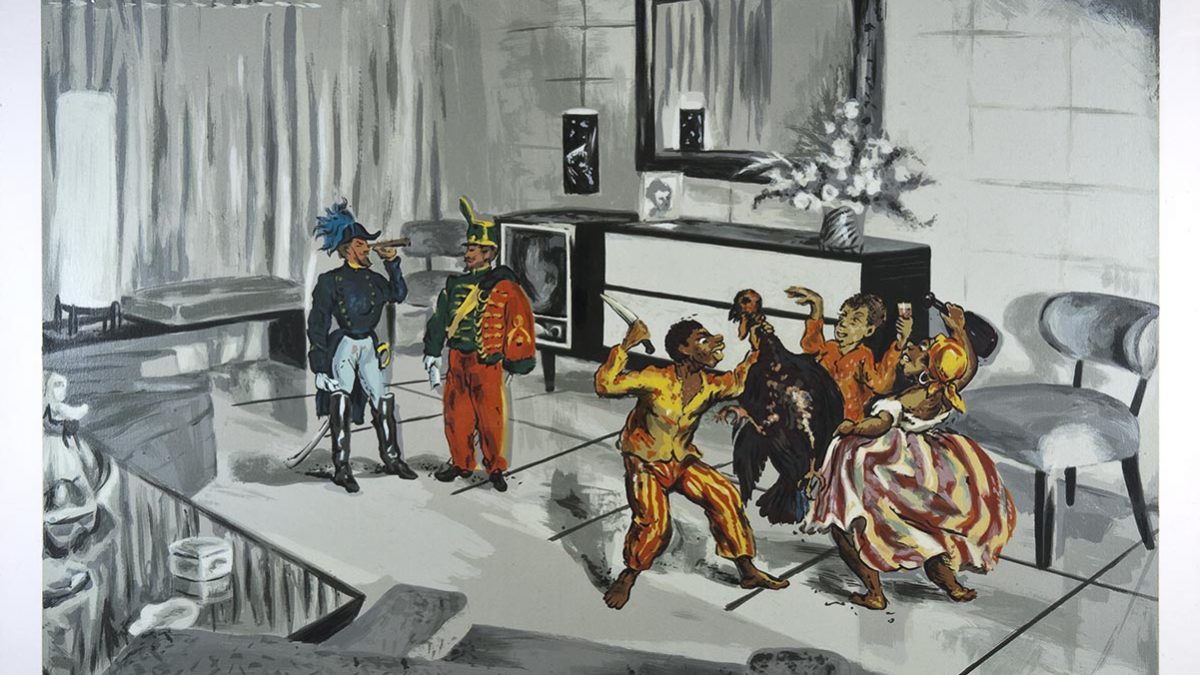 When I look at Pedro Álvarez’s work, I have the uncomfortable feeling that I am losing an important part of the game in which he was involved. My interpretations always leave me dissatisfied. And neither am I entirely content –I apologize for this– with the readings made by some of my colleagues (1). I have a feeling that there is much more that we can’t really decipher, although at times it seems that we understand the fundamental mechanisms of his creation. Such dissatisfaction has been confirmed time and again in the course of our conversations, when I have dared to discover, for example, a level A or B, and maybe vaguely a level C, but suddenly, the artist himself reveals to me a much more extensive, invisible, underground sequence of readings that could go on to an F or a G. Isn’t this a disheartening situation for an art critic with a certain experience? Even indulging my natural ignorance, I believe that there are always two things that conspire against me: the jocular, humorous character and the relative ease with which one can identify many of the references he uses in his paintings, some taken from our local history or depicting contexts, objects or characters that are well-known universally.

Pedro’s work almost always allows us to identify all its ingredients (and this is true above all for the privileged Cuban spectator), but the relationships that he established among them is precisely what is disturbing and disconcerting. In fact, all this is only the raw material, the necessary bricks for the building of his elaborate theory of art, a strange building that, far from remaining uncompleted because of his early death, we have not been able to size up in all its dimensions, which means that it has gone on growing on its own. In one of my texts, I mentioned that his work sought to continue “disrupting chaos” (2) (the chaos already created by the Revolution). His works were meditated, studied in all their details, and whatever was chaotic or disorderly was only on the surface, or the result of our incompetence or lack of information to understand the new type of order that he was suggesting with those purported disorders and promiscuities. I believe that Pedro Álvarez was intentionally and systematically trying to destroy (or at least undermine, using his great sense of irony and sarcasm) many of those conventional links that some supposedly respectable disciplines, such as history and Cuban history, in particular, have established in their discourses and books, and that apparently prevent us from understanding the roots of many of the problems that affect our immediate contemporaneity. Although a large portion of the images that Pedro used in his paintings belong to previous historical periods (19th century, the 1940s and 1950s) his true concern was always the present, today, now which was the 1990s, a turbulent period for Cuba with the collapse of the socialist camp and the termination of subsidies from some countries, especially the USSR. At this time, old problems and conflicts re-emerged, such as social and economic inequities, prostitution and racism, just to mention a few. This period was officially baptized with a rather grandiloquent title: Special Period in Time of Peace. I never understood what type of peace was being referred to. What difference can there be between the everlasting war which threatened us and prevented our freedom of expression, fearing to “discover our weaknesses” and to “give weapons to the enemy” (especially to the U.S. government) and that purported peace which had already begun to eat us away?

Pedro Álvarez’s favorite artistic tool (and we must acknowledge that his project had a big dose of skepticism and anarchism) was the collage, but a sui generis type of collage that did not involve the traditional manual mechanism of cutting and pasting images extracted from books or magazines, nor even the reproduction of such cuttings pictorially. Álvarez confronted, at a conceptual level, historical times distant from each other, antagonistic ideologies, incompatible aesthetic tastes, opposing ethical stands, different disciplines and cultural practices, with the purpose of making us accommodate or reorder such images correctly, so that we could discover how much was absurd, artificial and fake in the previous classifications that history (always politicized and thus not very objective) had accustomed us to, and had ended up by seeming completely normal. In order to speak of contemporary situations and to make critical comments about the Cuban reality, Pedro Álvarez made complex circumlocutions, somersaults between past and present, between such disparate situations and characters as Walt Disney’s Cinderella and Cecilia Valdés, a Cuban antislavery novel of the 19th century written by Cirilo Villaverde, so that his artistic discourse could end up seeming ambiguous and even inscrutable. How could this be critical art? How did he make his elaborate jokes and sophisticated ironies become messages social and political messages or debates on the emergence of stereotypes or colonial traits within the socialist revolutionary mentality or direct attacks against the persistence of racist or discriminatory elements in our society? Pedro Álvarez’s art was undoubtedly a critical art, committed to the problems of his time, although often the artist himself attempted to disengage jokingly from this reductive labeling:

“Why should there always be such tiresome insistence on critical conscience and social responsibility? (…) To paint you have to have faith. Faith may rest in the body, technical paraphernalia, the topic, expressive catharsis, in poetry, in social justice, in beauty or in money, but it is necessary to have faith. If you don’t believe in any of these reasons, you don’t paint. If you believe in all, you are very close to happiness” “(…)among all those things the only tangible ones are the first and the last, that is to say, the body and money, and it is through them that you have to channel the others” (3).

But in an interview with Cuban art critic Suset Sánchez; (4) unpublished up to 2006, Pedro also expressed: “My intention was never aesthetic in the first place, but ideological…That is to say that discourses on aesthetics are secondary…The aesthetic discourse has been a sort of alibi that I used to begin to say things, so they had the imposing packing of art, of painting. It seems to work because people began to paint like crazy in the 1990s, because there were no jokes at all to be made. I believe that we had run out of jokes and, on the other hand, you had to sell, you had to begin to use all the material that you had taken from school, or that you had bought in the black market since there was no money or anything.”

We do not have enough space here to explain how the Cuban artistic language of the 1990s, especially the visual arts, used the game of metaphors, puns, and subtleties in its discourse, as a way of expression under a situation of official repression and censorship, but let us note that, despite everything, these unpleasant situations ended up enriching the art of that generation to which Pedro Álvarez belonged. Perhaps we should be grateful? Anyway, for a better understanding of many works of that period, it may be necessary to have contextual references, which could seem like a kind of betrayal for the lovers of ambiguity or the universal significance of art.