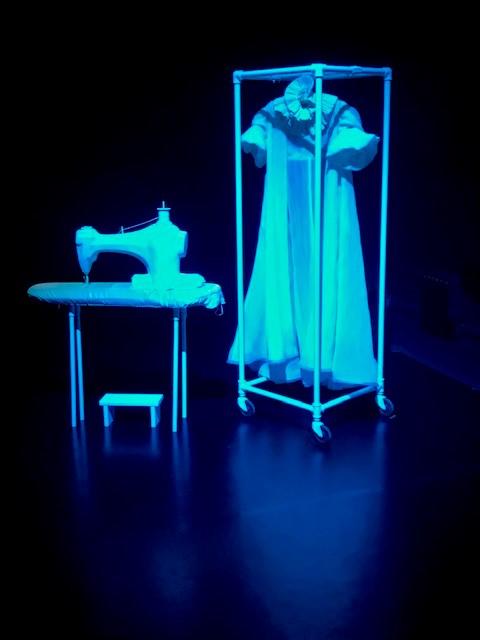 THE REGAL WOMAN OF THE WORLD

The lights went down with the soft notes of La Comparsa floating from somewhere in the dark, building slowly, as always, to its bittersweet crescendo. For a long long time, it was just that: the old Cuban songbook, from Danza Negra to La Bayamesa, its melodies, gorgeous still, melancholic, pared down to their essence by a classical guitar. Breathtaking. Literally: you could not hear a sound in the theater of the Baryshnikov Arts Center on West 37th,  packed as it was with old friends of Isabel and Ruben Toledo, and the best of a New York’s creative community spanning almost four decades. For most, it was a beautiful and solemn moment, perhaps even wistful; for the handful of Cubans present, it was devastating. I felt like the motherless child of the Negro spiritual—the correct emotional reference, it turns out, when a contemplative violin rendition of Amazing Grace was heard from a corner of a stage whose only embellishment was Ruben’s sculpture of a sewing machine and Isabel’s emblematic Organdie Silk Cape Coat. Yes, I told myself, a little ruefully, Amazing Grace is fitting at the celebration of a Cuban life now… and, yes, how sweet the sound.

But just as it ended, the glorious beat of batá drums soared to the rafters, filling my heart. The sacred messengers to and from ancestral orishas, their mighty clamor on cue to provide the right pitch to Isabel’s magnificent life, as its multifaceted contours revealed themselves at dizzying speed in the big screen. The pretty little girl in Camajuaní; the mischievous adolescent in West New York; the wild young woman of downtown lore. The groundbreaking designer of the ‘80s avant garde; the costurera of inspired cut and rigorous seam. The chic Manhattan sophisticate. The regal woman of the world. The unrepentant Cuban. The astonishing career. The range and scope of its creativity—Origami, Organic Geometry, Liquid Architecture, Suspension, and all the other remarkable articulations of her inventive imagination, everything that proved, in  her own words, that it‘s the great idea that matters, not the next shiny thing,  passed before us, one by one. The Obama dress that made her a household word that historic morning. The museum exhibitions, the Broadway shows, the ballet. The many awards. The hard work, the indomitable bravura, the unexpected flourish, the irrepressible laughter. And through it all, the timbre and tempo of the legendary love story. Ruben, the dazzled admirer of their high school days. Ruben, the elated boyfriend who could not believe this stunning and singular girl was his. Ruben, the loving husband. The cómplice.  The double mirror image: revelation and reflection all in one. Ying and Yang. Whimsical, cerebral, symbiotic, magical, passionate, secret, eternal.

It went so fast.

Speaker after speaker celebrated Isabel’s myriad accomplishments, each presenting a different view of her brilliance, a special nuance of her extraordinary genius: each, a precise vision of their personal Izzy. Something that the artists that performed in between, managed to convey in their own and curious way. The elegant Isabel, the fanciful Isabel, the poignant Isabel, the funny Isabel.

But the best, the best… was all Ruben. As always is…regarding Isabel. His letter, read by Woopie Goldberg, belongs with the finest love letters of all times.  I love to say your name twice. It rings like a bell inside my head, so soothing and gentle and hopeful…Sentiment at its most visceral and naked…Your mystical essence is still clinging to me like my second skin that feels so good…Longing…I remain wrapped in your cocoon of warmth and kindness that took you 45 years to weave around us…Desolate…I am protected in your meticulous folds and hidden pleats, your scent still lingers inside my lining. Woeful…Your soulful and honest eyes that I plunged deep into and never came back from…Bereft…Were you a dream? And, at the end, only… I love you. What else could he say?

The letter and the closing video, the one shot during the take of that iconic image of Isabel we all know and love, the one with the hula hoop under the huge skylight of their atelier and some-time home. The playful sequence, filled with joyful abandon, captures more than any other, the surreal quality that is the subtext, lo real maravilloso, of the arc of Isabel’s life…I might think you were something my imagination invented. Because of your lightness and your ethereal nature and fearlessness with life, your wide open heart…When Ruben comes into the frame, they dance to a song of Los Zafiros, the 60’s Cuban fusion group… mujer cubana, mujer cubana mujer cubana …over and over and over, her flying black hair filling the screen, a primeval force of nature.

But before that joyful ending, a precious gift from Ruben to us all. His 1000 Isabels– one thousand portraits of his beloved girl, his immeasurable muse, his splendid lover, his life’s compañera, from the beginning of their years together to the bewildering end…How should I interpret your sudden turn and departure?… He wrote in his letter…Thank you for allowing me to enjoy the many versions of you. My Izzy…This is your mystery. You are as soft as a cloud and solid as stone… In his unique style and with Drume, Negrita, the Cuban lullaby, sweet and lovely as always, hushing and sorrowful and…perfect.