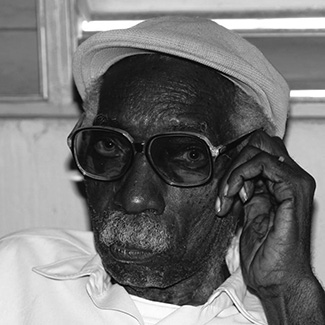 It may seem strange, even inappropriate, to include Ruperto Jay Matamoros in a show devoted to contemporary Afro-Cuban art. Perhaps the reason for such a decision is that Matamoros belongs to the Afro-Cuban world since he was a black artist. However, is it possible to consider Matamoros as a contemporary artist? Is this not a chronological or generational, as well as a stylistic transgression? Matamoros began to paint in 1937; he was active as an artist for 70 years and died in 2008 when he was 96 years old. He was a self-taught artist, with the exception of some rudimentary knowledge acquired when he attended the Estudio Libre para Pintores y Escultores (Free Studio for Painters and Sculptors), a brief teaching experience organized by avant-garde artists during the third decade of the 20th century. However, Matamoros was never interested in modernizing or updating his artistic language. Like most popular or self-taught artists, he remained faithful throughout his career to his own expressive forms -those that some continue to mistakenly classify as “primitive” or “naive”- and he was attached to his topics, his landscapes, his characters and the personal vision of life which he learned during his rural childhood and while performing a great many trades and occupations. The truth is that regarding contemporary art, we have a false idea about the supremacy of innovation of language and style, and about the automatic importance attached to it by current information and academic or professional studies about art. Contemporary art seems to have acquired a status related almost exclusively to the employment of new, experimental languages, with the predominance of formal inventiveness, cleverness, wit, and artifice which are often dictated by fashion and art market trends (1). As a result, a sizeable portion of artistic production classified as contemporary is conceived by many people as a sophisticated, luxurious, and incomprehensible puzzle designed to entertain a minority of initiates. However, I would like to point out that this view of contemporary art excludes and discriminates against any artistic production whose language is considered dated or conventional, and thus leaves out popular or self-taught painting, not to mention other creative productions, full of aesthetic and symbolic values which are simply considered nonartistic. Not even coincidence in time has allowed popular artists to be given such credit since the term “contemporary” has ceased to operate as a chronological concept but rather refers to the youngest generations of elite artists closer to mainstream dictates. Despite these bureaucratic hindrances typical of the art system, we believe that the works of Jay Matamoros are sufficiently abundant in elements of interest on the issues approached by our Afro-Cuban project to consider his contemporaneity, or his up-to-datedness, very seriously. Perhaps this is a subjective decision, but didn’t Arnold Hauser tell us “of any art with which we have an authentic relationship we build modern art”? (2). By including Matamoros -as well as some other artists in this show- we are attempting to dismantle the false elitist and formalist concept of contemporary art in order to present an approach based more on the social and cultural importance that these works reflect or provoke. Jay Matamoros was able to cut through a good number of generational barriers graciously, inviting an almost unwavering public interest in his work and the contents of his discourse, convinced that there is no better way of saying things than to say them with simplicity. His artistic originality was never dependent on the juggling of the language, which at times surrounded him. Nevertheless, it is not only his artistic stand that has moved us to include him in our selection.

The work of Jay Matamoros has received praise for its beauty, its country-life grace and the sensuality of its coloring, but the critics have always stopped at the easy frontier of the aesthetic, of appearance, obviating or neglecting its reflexive aspects, his philosophy, the depth of his knowledge of the world. As is the case with other older black popular artists that could have accompanied Matamoros in this Afro-Cuban show, specifically Gilberto de la Nuez (1913-1993) and Elpidio Guerra “Mirito” (1923-1995), our critical response echoes the stereotypical and condescending perception with which we observe the humble people, workers, and farmers. We find them amusing, open, witty, but of simple minds, or shallow in contrast to, for example, enlightened artists, intellectuals who practice conceptual or post-conceptual art. However, popular Cuban painting is particularly complex and intelligent. The ornamental and picturesque may be an added value, but it is generally a conscientious, reflexive art, at times wise, deeply interested in history, politics, and the social, cultural, racial, and religious problems of our country and the world. From this perspective, the work of Jay Matamoros has been scantly celebrated or studied for its true but least apparent value, despite the fact that he was granted the National Prize for Painting in 2000. The two works that we will comment on, among thousands made by his hands, clearly demonstrate Matamoros’s interest in reflecting issues related to our history, our traditions, even when sometimes  African and Afro-Cuban issues occupy a hidden, veiled place but are undoubtedly present.

El Labrador, 1988, despite its idyllic, picturesque aspect, seems to be an image taken from the years immediately after the abolition of slavery in Cuba (1886). This was a time when many former slaves, both African and Creole –some of them brought to Cuba from other Caribbean colonies such as Jamaica or Haiti– fell into total poverty and neglect, lacking sufficient ability or training to work as free men after spending so many years laboring in the sugar plantations and receiving sustenance from their masters. Many of these former slaves –some of whom had participated as soldiers and officers in the independence wars against Spain in 1868 and 1895– could only find shelter in thatched-roof huts in the fields and devoted themselves to growing root crops and to animal husbandry to survive. The figure represented in the painting, with red and blue ribbons around his hat and waist colours of the Haitian flag), is perhaps a Haitian or of Haitian descent. There were many Haitians in the eastern part of the country where Jay Matamoros was born and spent his childhood and adolescence, so that this painting may be a direct testimonial of their situation or something he heard of from his parents. Either way, this may be one of the many expressions of historical disadvantage still spoken about by part of the black population of Cuba who, despite equal opportunities offered since the revolution of 1959, still find it difficult to overcome their unequal starting point, as some social scientists have mentioned (3). The presence in the painting of a majá (a local non-poisonous snake) seems to confirm the Haitian-Cuban identity of the character since this animal is part of Voodoo rituals, a religion from old Dahomey (today Benin) which is still practiced in the eastern region of Cuba and Haiti.

Flores de la Tierra, 1994, is a peculiar compilation of proverbs and popular sayings about which Matamoros had already made a series of small-format paintings that he gathered in this painting in a single spike of rice. The grain of rice seems to allude to the synthesis or minimal place in which information may be stored. In this case, all the proverbs are related to the eyes and vision: “an eye for an eye”; “the master’s eye makes the horse fat”; “the apple of my eye” (literally in Spanish “the girl of my eye”); “water spring” (literally in Spanish “water eye”); “at first glance” (literally in Spanish “at the flower of a glance,”), etc. In the traditional African system of knowledge, as inherited in Cuba, the summarized and metaphoric presentation of messages is very common, with proverbs and sayings occupying an important place. In the Yoruba divination systems practiced in Cuba, both Ifá and Santería or Regla de Ocha, as well as in the religion of Palo Monte, proverbs are widely used. Although many popular proverbs and sayings used by Jay Matamoros stem from rural culture and not from Afro-Cuban religious contexts, his painting may be considered a celebration of our oral and poetic tradition, rich in symbols, to which many Africans and their descendants made great contributions. One way or another, his language is full of small symbols. The proximity of the sickle to the foot of the spike, for example, seems to clarify in a codified language that he is referring to gathering a crop of proverbs. Moreover, in both paintings, the flamboyant is present like in many of the artist’s works; Matamoros always identified himself with the Royal  Poinciana tree.