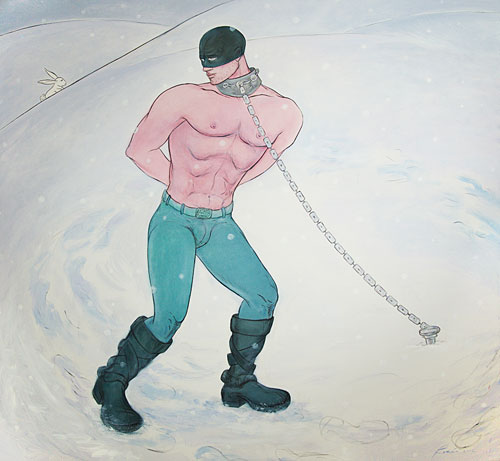 URBAN REBELLION IN THE CIRCLE OF MANIAS: Extreme Quotas of Pain and Pleasure

Rocío didn’t have the faintest idea what she would encounter when she returned to Havana in the mid- 1980s. Emerging from the dense shade of the Iron Curtain, with no internet or email and sporadic mail service, concentrating, with requisite dignity, on the skills necessary to successfully navigate the demands of the Repin Academic Institute of Art in Saint Petersburg, she must have blinked at the bright light emanating from her San Alejandro Academy of Art classmates, now celebrities.

Havana’s artistic scene was like an ode to the post-conceptual and neo-dada movements and emphatic social criticism, while performative activism ruled the streets. Rocío had to deal with her own demons: an interior world plagued by long-lasting personal and cultural ruptures. Despite enjoying the visual discourses and the “movida” [happening scene], she didn’t envision herself creating any of them. She became an outsider, a priori. She knew without doubt her thing was painting, but bucking popular trends is always a risk; the art world may overlook you. (At one time, being a painter-painter was an act of professional courage. I venture to suggest a possible relationship here: Rocio’s intensely psychological and encrypted paintings of those years, characteristic of the neo-expressionists of Freudian descent, is empathic with various points of fellow neo-expressionist Tomas Esson’s works. Alas, this observation is minor. Both artists encounter a relentlessly aggressive beast prowling the main stage; they aim their respective criticisms at a gravely constructed reality: the monolithic power of Thomas Hobbes’s controlling monster Leviathan, whose nature Hobbes expresses in a nutshell: “man is wolf to man”).

Rocío García also felt displaced by a system of advanced learning in the arts, and having graduated from a Soviet academy created a double suspicion. On one front, some Cuban professors/administrators at the Art Institute in Havana harbored decades of ideological prejudice against the Soviet professors’ outdated pedagogy, which focused on academic realism. On another, the Cuban government schemed to prevent returning graduates who carried any trace of perestroika and glasnost from teaching in Cuban classrooms; they were deemed a lethal ideological influence on the student body. As a result, Rocío ended up at San Alejandro, an institution that had lost its leadership standing and symbolic spirit during those years. In the arm-wrestling between context and personal doubts, trials,  studies, and the ongoing process to redefine her painting, she began to exhibit here and there—in orbital spaces, if you will—until 1997, when Geishas, or Patterns of Life Flowing at the Gallery 23 and 12 indicated the caliber of her artworks to come. She left behind her neo-expressionist trances to present new credentials; lines and a decorativeness borrowed from Matisse lend sensuality and elegance to the figures and atmospheres; she shamelessly declares her fascination with the great masters of the pictorial tradition. The heavyweights –sophistication and monochromatic leanings– were very much here to stay.

Note that while her generation from the San Alejandro Academy had long enjoyed their fame, Rocío did not prove successful until the late 90s, along with a younger generation of artists. Although timid and romantic, decentered, and a sort of “misfit”, by 1997, she hit her artistic stride, losing none of her aura and without any ups and downs. A solid production punching so far above its weight is a rare thing.

Rocío is measured but powerful, a cult artist, known to use the body as the avatar of beauty and perfection. A master of impeccable technique, she confesses her debt to, not only Matisse’s The Dance, but also Francis Bacon and Japanese art, from which she seized the minimal and synthetic treatment of color planes. Influenced down to the marrow by the logic and imagination of films and comics, her paintings generate a sensation of sequence. Her work is full of stories and details, theatrical but not visually overcrowded largely because delimitation and cones of light permit her to express the confluence of different times and spaces on one canvas or spilling over from one to the next with unprecedented delicacy and abandon.

From top to bottom, side to side, and corner to corner, this stage discloses her true obsessions: power relations and constantly imposed simulations. Homoerotic passages, the sadomasochism in some scenes, and the truculent transactions between characters and systems are vestigial depictions in all of her production. Micro-scale pretexts comment on a major scheme: totalitarian misogyny and the absolute control of power. Rocío methodically metes out the behavior, no matter how irrational or libertine it seems, to the minutest degree. No other Cuban artist, past or present, has even tangentially treated the homoerotic so systematically, with such brutal honesty and courage, although it is only one of her discursive platforms broaching other themes that transcend it, and her work has yet to exhaust it. All these immensely urban series, plagued by struggles between opposites, are grounded in reality (even the verifiable facts); they’re external compendiums that shun local color, reflecting a perspective beyond good and evil or specific contexts.

We discern that, like ancient cynicism, her paintings are exhibitionistic, performing two-fold meanings. A pantone of archetypical characters betray, circulate (think catwalk models), and the impudence and indifference reveal the moral compass of a world saturated with black markets and gambling dens, where vexation and subjugation run rampant; a sordid jungle of insalubrious and despotic behavior of de Sade’s Maâcoro and García Márquez’s Macondo.

Taken together, her works from A to Z constitute an essay on the tyranny of the norm, the fascistic binaries and phallocentric totalitarianism that have governed the West. For that reason, she factors in many codes, not only from Matisse and Bacon, but also from cowboy movies and Tarantino’s humor. Oh Pasolini! If we could choose just one who always lends a hand, it would be this Italian filmmaker. In the controversial Salo, or the 120 Days of Sodom, he emphasizes the real sense of sex, which“serves as a metaphor for the relations of power and submission… it represents what power can do to a human body; the scorn of a human body, the annulment of another person’s personality….”. Pasolini’s statement might have been snatched from Rocio’s mouth; her followers intimately recognize in it the artist’s Men, Machos, and Sailors and The Tamer and Other Stories (utterly embedded in our visual chip).

Perhaps the most efficient tool to soften the humiliation of those rituals or to escape the shackles of stagnant morals is the mask, the disguise, or the trafficking with the simulacrum. Immanuel Kant observed “the art of pretense that has become second nature….” (Critique of the Power of Judgment). What causes a human being to “present the true intention behind the illusory face” is a question that keeps us all awake: Euripides, Aristophanes, Voltaire, and Nietzsche; Ichikawa, Elvia, Mishima, and Sarduy. Power and simulation are the primary obsessions of Rocio’s complete pictorial, cerebral production, her sacred writings.

The German thinker Peter Sloterdijk provides this invaluable thought: “there, where all cover-ups are constitutive of a culture; there, where life in society is a concerted effort of lies, an aggressive moment appears in truth’s real expression, a stripping that is not welcomed”. In the Cuban case, it’s worth pointing out that, the disguise, the front, and the pretending acquire the quality of pragmatic shamelessness, injected into our cultural genes since colonial times, but the phenomenon of cynicism is not new and, in fact, it’s global.

We know that “the metaphor does not make the revolution” but Rocio’s works, in their transparency and honesty, generate that emancipated territory where maintaining appearances isn’t necessary. While it’s a weak and ephemeral space –mental dystopias, individual escapes– we don’t ask much more of art. It’s about bland head games with apparent robustness; much like any fiction with pretensions. We should thank Rocío García for that. My guess is she gives us a lot.