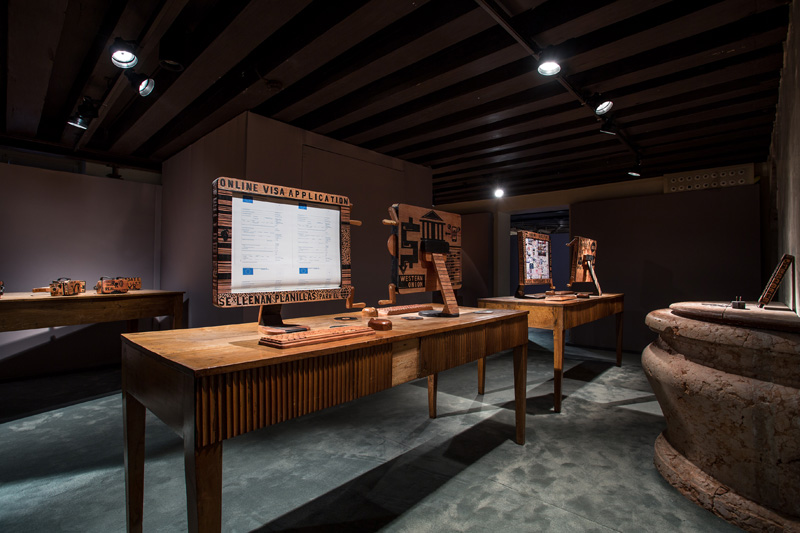 A COUNTRY IS AN ILLEGIBLE DISENCHANTMENT

If someone says, as the title mentions, that a country is a mental construction (which may mean appearance and deception) we deduce that this exhibition is an anti-modern manifesto having to do with the vanishing of sovereignties and national states, since real boundaries are swept away in the illusion, representing their decline in an era in which, theoretically, there is access to everything and everyone. But no, the artist warns us that this is a privilege of the economic and financial capital.

In the heart of technology—which is just as saying Tokyo —, Abel Barroso walks down the streets talking through an atypical cell phone. In front of people carrying mobiles with Bluetooth, Internet access, megapixels ready to take pictures and videos with an acceptable resolution, and so on, Abelito’s equipment attracts attention because of its enormous size in the era of technological miniaturization and, also, because it does not hide the material with which it was made: a plug of engraved wood.

The nature
of the performer’s conversation is entirely apocryphal because he is not
engaged in a dialogue with a specific person, since his telephone does not “work”.
Abel is speaking, provoking the context.
He shows his “ignorance” in technological matters with self-confidence.
Exchanging symbolic capitals of technical-cultural and cult receptions.

This
gesture by Abel has its counterpart in Technology
Man (2002), a robot designed and engraved by him in his own image and
likeness to be able to slip in and walk from one place to another demonstrating
his flair for anything in an evident parody of our condition as “second line
spectators” alternating with the first one according to the strokes of new
geopolitics.

These sorts
of bricolages following Abel Barroso’s way become part of technological
mythology by negation, that is, new figures, all in a techno imaginary with povera look caused by the recycling of
mind and objects whichthe
artist accomplishes in his pieces starting from an illusion and our capacities
(innovating, for example) to make us enter in that “global redistribution of
cultural power” and survive in this diffuse and rhizomatic tide called Empire
(1), where managing hybrid identities seems to be one of the programmatic
topics.

Café Internet del Tercer Mundo (Third World
Internet Café, 2000-2003) inaugurated this tragicomic wave of installations and
oeuvres having to do with the
peripheral consumption of technology. But Abel’s humor allows him to turn the
defect into praise and criticism goes off in all directions: to excess and
lack, to domination and yielding.

In his works we can find an entire visual essay on the mechanisms of political, economic and cultural resistance in those countries that, because of diverse reasons, have been excluded from the new logics of cultural distribution and consumption (we may say peripheral, although the term is considered in disuse). He does it, that’s true, with an accentuated sense of humor and a ludic will (almost all the pieces are interactive) involving in a perverse way audiences coming from all cultural logics. Abel points all the time at that “international division of work” which not long ago Nestor García Canclini outlined and was summarized in the Tenth Havana Biennial in the work La fábrica de la globalización (The Globalization Factory, 2009) (2). In it, grabbing the logotypes of big transnational companies, Abel drew an entire map of the complicated power networks prevailing in the “global imperial rainbow” of production, distribution and consumption of this era, in which unbelievable displacements of capital have taken place in the form of interweaved, rhizomatic rings. Abel answers to them with not a little sarcasm and a dose of inclusive cynicism with the series Se acabó la guerra fría, a gozar con la globalización (The Cold War Is Over, Enjoy Globalization) (3). In this way, even with video-installation pieces, Abel Barroso closed a cycle which was juxtaposing with another that, in a given way, is homologous to it: migration and the controls mortifying it.

Belonging
to a generation which vindicated engraving as a genre in Cuba (4), and within
which it is impossible to obviate his name, Abel Barroso focused his attention
on things having to do with the invisible sale of the country through gestures
as sublime as donations and privileges of others and to others, while his
colleague and friend Sandra Ramos, through engravings and autobiographies,
assembled an excellent career with the migratory topic as its axis. It is very
odd how Abel was exploring the same topic, but from a different dimension: the
country is leaving in a less tangible way.

In a
retrospective look we will find Teoría de
tránsito del arte cubano (Theory of Cuban Art Transit, 1995), which belongs
to the permanent collection of the National Museum of Fine Arts. The island of
Cuba (5) is built on boomerangs engraved with names of Cuban artists and,
between the flying structures and the wall, Abel inserted airplane tickets and
papers having to do with the trip. This sort of tribute to his generation
becomes, within the creator’s career, an offside, atypical, off-centered
incursion and, therefore, very curious apart from being excellent. Furthermore,
the procedure is the same he has always exhibited: to show the matrix in the
level of an autonomous work. Divesting the engraving from its guild complexes,
minors or nobles questioning him on his (il)limited conceptual resources going
further from traditional serialization (Abelito’s edition may be the
conjunction between the multiple original and the autonomous sculptural object)
and the massive work reducing it, in many cases, to unique pieces, as the case
is.

Specialist
David Mateo saw it clearly from the beginning: “…Abel Barroso stressed the
questioning of the apparent autonomy of the xylographic procedure when making
plugs and molds equally interact in installations very well finished and
endowed with ingenuity. He is able to conceive a work articulated from the very
sagacity of its self-reference, from its system of construction and
deconstruction” (6).

So that
work, advanced we must say, became an indispensable liaison for a twenty-year
career. Although we must say Abelito had already rehearsed with borders done in
mock-up scale in Visa para El Dorado
(Visa for El Dorado), and Border Patrol,
among others. In them, engraved acrylic seemed to be a new element and the
document persists as something intruding and alien. Here too, as in others, the
spectator completes the act of creation by turning the handles allowing or
obstructing the path, life or death.

On the
other hand, to demonstrate he is not an engraver in the strict sense of the
word, but an expansive artist over and above the genre, Abel begins to make
digital designs that he later takes to the canvas as projects and autonomous
paintings at the same time.

In the
exhibition Un país es una ilusión (A
country Is an Illusion) (7), for example, Abel designs boundaries of every type
and in various latitudes; he appeals again to playful relaxation and naïf
appearance as a mitigating factor of responsibility. There we find gambling
tables or bike and scooter tracks. The impossibility of a real crossing and the
cunning arguments used to violate controls tell us about the diffuse and actual
status of the borders and of a globalization consisting, also, in exclusion.
Migrations, of course are not so fluid, although they are constant. People
arrive drop by drop to their desired destination. They also die in gushes.

If someone
says, as the title mentions, that a country is a mental construction (which may
mean appearance and deception) we deduce that this exhibition is an anti-modern
manifesto having to do with the vanishing of sovereignties and national states,
since real boundaries are swept away in the illusion, representing their
decline in an era in which, theoretically, there is access to everything and
everyone. But no, the artist warns us that this is a privilege of the economic
and financial capital.

If every
country is an illusion, every country is, also, a fiction. A sublimation
erasing unease and excesses, a construction the imaginationdesigns from individual hopes mixed with avalanches of
advertisements and real shortages. Every country is also an evocation, a
mixture of hardly legible hope and disenchantment.

Every
country is, even and above all, confusion.

One of the
most beautiful letters I have received in my life was by Manuel Sosa, a Cuban
poet living in Atlanta, who can summarize, from poetry, the spirit of the
exhibition Abel offered us:

“Vita nuova is suffering and nostalgia.
But intuition is an effective key. A new certainty exists: everything is
natural. Or better yet, everything is natural and nothing is real. If we did
not think this way, we would not be able to survive. The landscape is not real,
it is only a projection of our whims. Right now, when we remember having peed
on a palm tree and eaten a tender shoot of guinea grass, we realize that we have
eaten and urinated a portion of the vacuum.

“In the
lengthy anguish of a drop falling, we have not seen the fall. It is not
worthwhile to poeticize and lock up an image of dew if we cannot poeticize the
drops of poop on the border of Celedonio’s toilet.

“So you
should not worry. Everything is possible in this world, even redemption.

“The sugar
cane harvest can still be of all us.

“The crow and the tocororo are the bird.

What can I
say after this? Oh, that the underlining of the word bird is mine.

(1)“In contrast with imperialism, the empire does not establish a
territorial center of power and is not based on fixed borders or barriers. It
is an off-centered command apparatus with no territoriality progressively
incorporated to the entire global kingdom within its open and expansive
borders.” Michael Hardt and Toni Negri. Empire,
n/d.

(2)Held in the
National Museum of Fine Arts.

(5)The
topic of insularity was an exceedingly expensive obsession in Cuban art which
basically took place in the nineties.